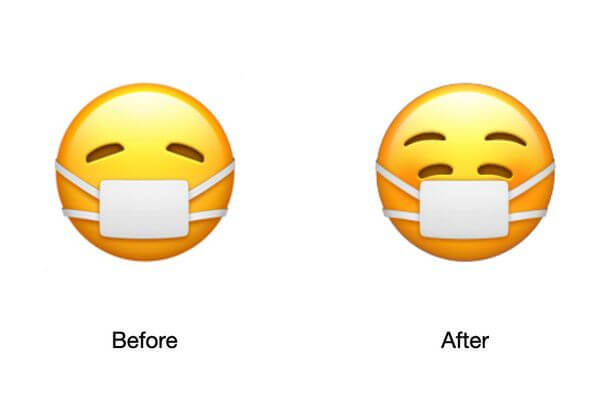 New Face Mask Emoji and The New Ones Coming in 2021

Even when the emojis appeared on our tech devices many years ago, they are still a boom on social media. Both Apple and Android are always adding new emojis to their software. Apple had launched their famous memojis after introducing the emojis years before, but even with them, the emojis continue to be a boom. Even more than the memojis.

The emoji wearing a mask was first added in 2008 to iOS and 2012 to Android. Ever since COVID began, this emoji is the one that is relatable to our current situation. I think we all agree that wearing masks could be annoying a point, but the issue here is that emojis wearing mask looks like sad faces.

Have you already updated your smartphone? Now the emoji will look happier! Android updated its mask emoji in March, and Apple already announced the update of their emoji on the new iOS 14.2. Being honest, at a point, I believe that this new emoji feels happier than us while wearing a mask.

What about the upcoming emojis? We will be able to enjoy new emojis in the upcoming 2021. The new emojis pack expects to introduce hundreds of new emojis, but not all of them are already verified.

Which emojis are already confirmed to be launch the next year? A bearded man, a wrapped heart and a heart on fire (maybe to express a heartbreak or a lovely feeling), a face in the clouds (expressing daydreaming), and there will be more than 200 mixed-skin-tone for the couples on the “couple with heart” and the “kiss” emojis.

The new emoji pack strives to support the “black lives matter” and “love is love” tendencies. It is great how emojis are being using tech to fight through social conflicts. New emojis could appear on your phone from January to October 2021, so stay tuned to all the details.

What does Biden's victory mean for tech?